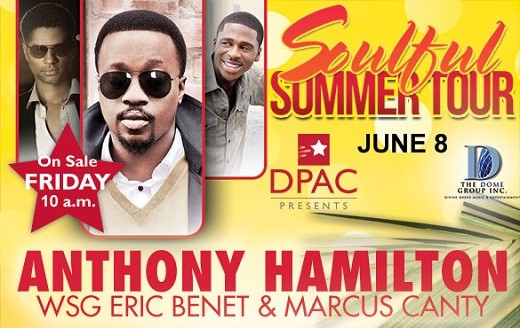 The spring is here and the summer is just around the corner. It’s time to enjoy the lovely weather and attend a few summer concerts. Soul fans are in for a treat when the Soulful Summer Tour featuring Anthony Hamilton with special guests Eric Benét and Marcus Canty come June 8 as part of Cool Summer Nights at DPAC.

Fans began paying attention to Anthony Hamilton in 2002, when he sang the infectious hook on the Nappy Roots’ “Po’ Folks.” That performance netted the singer the first of 10 Grammy® nominations for Best Rap/Sung Collaboration. More recently, his arresting voice provided the perfect accompaniment to Jill Scott’s earthy vocals on the captivating duet “So in Love.” Their dynamic pairing also set a record: 18 weeks at No. 1 on Billboard’s Urban AC chart. His fourth studio album, Back to Love, debuted at number 12 on the Billboard 200 chart, selling over 63,000 copies in its first week. This was his follow-up to the 2008 gold-certified, No. 1-debuting album, The Point of It All.
The Charlotte, N.C. native’s resume also includes performing a virtual duet of “Buon Natale” alongside Nat King Cole for The Nat King Cole Holiday Collection and a cameo appearance in the 2007 Oscar®-nominated film American Gangster starring Denzel Washington. Hamilton also performed that soundtrack’s lead song, the Diane Warren-penned “Do You Feel Me,” while his songs “Struggle No More” and “Can’t Let Go” appeared on the Daddy’s Little Girls soundtrack.

R&B crooner, songwriter and actor Eric Benét has successfully released six albums and was also nominated for a 2012 Grammy® Award for “Best Traditional R&B Performance” for his single “Sometimes I Cry.” He has also been active as an actor and most recently starred in his first lead role in the feature film Trinity Goodheart. Additionally, Eric had a recurring role on the television program For Your Love (1998–2002) and made his film debut alongside Mariah Carey in Glitter (2001).

Marcus Canty is the 21-year-old who won the hearts of America on Fox’s XFactor talent show. In 2009, Canty was chosen over hundreds of high school seniors across the nation by the National Foundation for Advancement In The Arts – YoungArt (which recognizes and supports America’s most talented 15 to 18-year-olds in the visual, literary and performing arts), and was inducted into the organization.

All guests require a ticket, regardless of age. No one under the age of 5 admitted into the theater, and children must be able to sit quietly in their own seat without disturbing other guests.