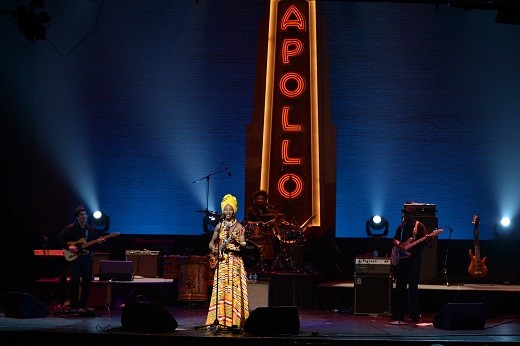 The legendary Apollo Theater does it again by engaging their crowd with yet another fabulous experience in Harlem, New York. This time, in collaboration with World Music Institute, the Apollo team presented the Annual Africa Now Music Festival which is a four–day music event spotlighting today’s African music scene.

This occasion marked the second annual festival and featured a very powerful and impressive lineup of artists who have drawn upon their roots for inspiration – and transplanted them onto the global music landscape. Africa Now was anchored by a blow-out concert on April 5th set on the legendary Apollo stage featuring: Malian songstress Fatoumata Diawara; Senegalese trio Les Frères Guissé; and reggae/Afrobeat collective Sierra Leone’s Refugee All Stars. Just as the main stage concert ended, another began at the Apollo Music Cafe and Soundstage featuring world renowned singerAzania. Opening for Azania was Baja and The Dry Eye Crew.

Also during the festival on Friday evening April 4, 2014 there were performances by Chop and Quench and The Fela Band at the Apollo Music Cafe and Soundstage located just above the main theater. The performance were riveting with lots of energy and the audience were so exciting they even got up to dance to join in on the festivities and although the concert ended at midnight, there was an after party just a few steps away to keep the crowd going.

As part of the Apollo’s 80th anniversary season, Africa Now Festival further establishes the legendary Theater’s longstanding role as a creative catalyst for Harlem, New York, and the nation and as a platform for culturally diverse artists.

Along with the music festival, the Apollo Theater recently announced the public phase of a $20 million fundraising campaign to extend the nonprofit institution’s role in fostering artistic innovation, supporting emerging artists, and deepening its engagement with audiences locally, nationally, and internationally. The 21st Century Apollo Campaign supports the growth of a variety of programmatic initiatives, including the Africa Now Festival. The Theater is currently celebrating its 80th anniversary season.