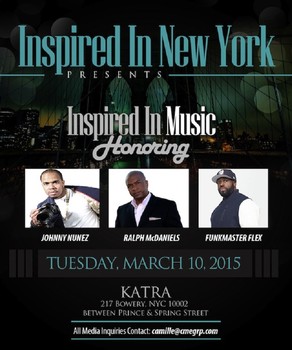 Inspired in New York begins their celebrate series again for 2015 with more great personalities in music. This will be a great night of celebration.

The attendance is by INVITE ONLY.

Johnny Nunez, Ralph McDaniels and Funkmaster Flex were chosen to be honored by the honorableAssemblyman William Scarborough due to their many years as innovators and trendsetters in the Music/Entertainment and Media Industries. All honorees will receive a proclamation from New York for their contributions in the fields of media, arts and entertainment.

The crème de la crème of the entertainment industry will be in attendance to support and honor these trendsetters and innovators on their very special day. 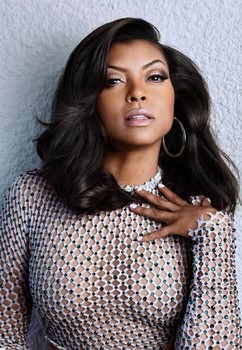 If you are in New York City for the summer this event is just for you. It is for filmmakers, fans and beyond. ABFF announced today that Oscar-nominated actress Taraji P. Henson, has been selected as the 2015 American Black Film Festival’s (ABFF) celebrity ambassador. The 19th annual Festival will be held June 11-14, 2015, in New York City at the New York Hilton, AMC Empire 25 and the historic Ziegfeld Theater.

Yvette in Baby Boy, Shug in Hustle and Flow and Queenie in The Curious Case of Benjamin Button, for which she was nominated for an Academy Award for Best Supporting Actress. Henson also co-starred in the CBS drama Person of Interest and currently stars on the hit FOX musical drama series, Empire.

“I want to thank Jeff Friday and everyone at ABFF for the honor of serving as your 2015 Ambassador. It is a privilege to join my fellow filmmakers to celebrate and support Black artists and the artistry that resides in all of us.” -Taraji P Henson

“I have a great deal of admiration and respect for Taraji. She is one of the industry’s finest actors and has a true sense of community; allowing others to stand in her light. We are extremely pleased to have her as our 2015 Ambassador,” says ABFF Founder Jeff Friday.

Film Life, Inc. Founder and CEO Jeff Friday and Black Enterprise President and CEO Earl “Butch” Graves Jr. recently created a new joint venture, representing a partnership between two prominent black-owned media and event companies with powerful brands, each with legacies of showcasing the best of African American culture and achievement. Black Enterprise and Film Life Inc. have formed ABFF Ventures, an equity partnership to produce the American Black Film Festival (ABFF), and the return of the Black Movie Awards, formally on TNT and other content focused on the entertainment, film and television industries.

The American Black Film Festival (ABFF) is a four-day event dedicated to showcasing quality film and television content by and about people of African descent. Annually held during the month of June, the ABFF is committed to the belief that Black artists and content creators deserve the same opportunities as their mainstream counterparts. ABFF founder Jeff Friday, conceived the festival in 1997 as a vehicle to promote diversity in the motion picture industry. Today, the festival is widely recognized for showcasing established and new Black talent, both in front of and behind the camera, and is regarded as one of the leading film festivals in the world. The ABFF is produced by Film Life, Inc. and Black Enterprise.