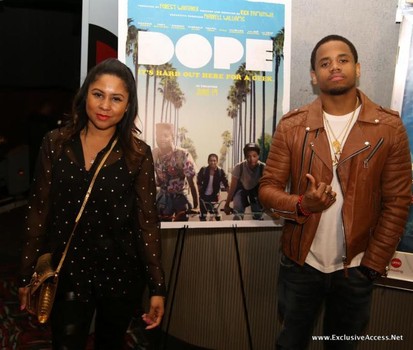 The summer movie season is underway. There are a few blockbusters and even a few highly anticipated independent films being released. Open Road Films’ newest film simply called “DOPE” is set to hit theaters on June 19, 2015. On Thursday, June 4, 2015 there was a special New York City press screening of the film “DOPE” at the AMC Loews 19. The event was hosted by actor and recording artist Mack Wilds and television & radio personality Angela Yee.

The high profile guests and press all lined up to be lead into the theater which was packed and filled with anticipation as viewers and press attendees waited to see the film currently being buzzed about.

The film intelligently follows the three kids as they try to stay out of trouble and survive in the mean streets of south central LA. Even with all of their antics, they each want to graduate and go to college, but have so many incidents that could derail their plans unless they use their brains collectively. The film is definitely a must see and promises to be familiar, yet different depiction of today’s urban youths. “DOPE” hits theaters June 19, 2015. Be sure to grab your friends and family and check it out.

For more on the movie, connect via the social networks: Facebook and Twitter. You will be glad you did.