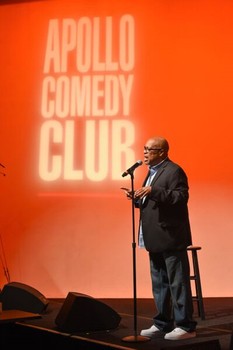 As a part of a new series, the Apollo Theater launched a new comedy initiative called the Apollo Comedy Club. The Apollo Comedy Club opened its doors on Thursday, October 1, 2015. Directly preceding opening night.To kick off the series, the theater inducted non-musical artists into the Apollo Walk of Fame. The honorees were veteran and groundbreaking comedians: Jackie “Moms” Mabley, ReddFoxx and Richard Pryor, all of whom had a longstanding relationship with the theater and are considered Apollo Legends. In fact, all three comedians have left a major impact on comedy today and are often mentioned by current and rising talent when asked who inspired them. For the ceremony, some of the family of the late legends were on hand to speak and an acknowledge the induction.

The Apollo Comedy Club has a partnership with the Bob Sumner who might be best known as the producer of Def Comedy Jam and the creator of LAFFMOBB on Aspire TV. The series will showcase some of the iconic Theater talent returning to its comedic roots as it further expands its robust programming offerings.

In addition, the Apollo Comedy Club will feature an evening of comedy on the Apollo’s intimate Soundstage starring the best up-and-coming talent in comedy today. The first season of the comedy club will run from October 2015 to June 2016. For the show, doors will be open for bar, food and music by DJ Qool Marv at 9pm and the show begins at 10pm with host Smokey Suarez. There will be laughs and so many more surprises to come. For more information visit:https://www.apollotheater.org/.