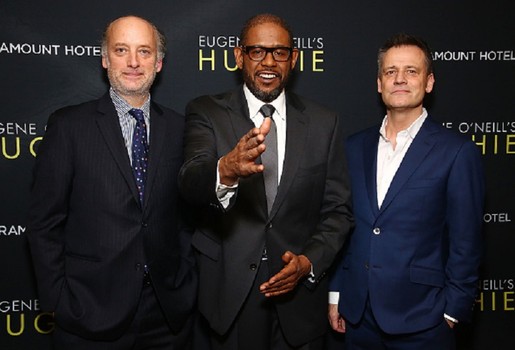 Photo used with permission from Hughie on Broadway

With this being Whitaker’s first Broadway run, audiences were especially interested in seeing how well he would translate from film to the stage. The New York Times calls Forest Whitaker, “one of the pre-eminent actors of his generation. Whitaker is a magnetic actor” and the Chicago Tribune says “Forest Whitaker is one of the best actors of our generation.” CBS says “Whitaker doesn’t so much play roles as inhabit them” and Variety calls Whitaker “an acting force.” This is very apparent in his portrayal of this down and out gambler.

As theater buffs may know, the play is set in the summer 1928 in New York City. Beyond the bright lights of the Great White Way, a small-time gambler and big-time drinker returns to the faded hotel he has made his home. He encounters a new night clerk at the front desk and as the early hours of the morning give way to another dawn, he continues to chase the American Dream in order to survive. HUGHIE is a rarely seen theatrical masterpiece that beautifully explores redemption and offers a unique insight into the human condition.

Hughie first premiered on Broadway in 1964 with Jason Robards in the role of “Erie” Smith. The role of “Erie” has been played by illustrious actors such as Burgess Meredith, Ben Gazzara and Al Pacino. Now Forest Whitaker can be added to the list of those playing this interesting an complex role. Forest Whitaker quickly makes the role his own and keeps the audience’s attention as he unveils his character.

Tickets for Hughie range from $25 – $149, and are available at: HughieBroadway, Telecharge (212.239.6200), or directly at the Booth Theatre box office. Please note, the show only has a strictly limited engagement so if one waits to long, they may miss the show.