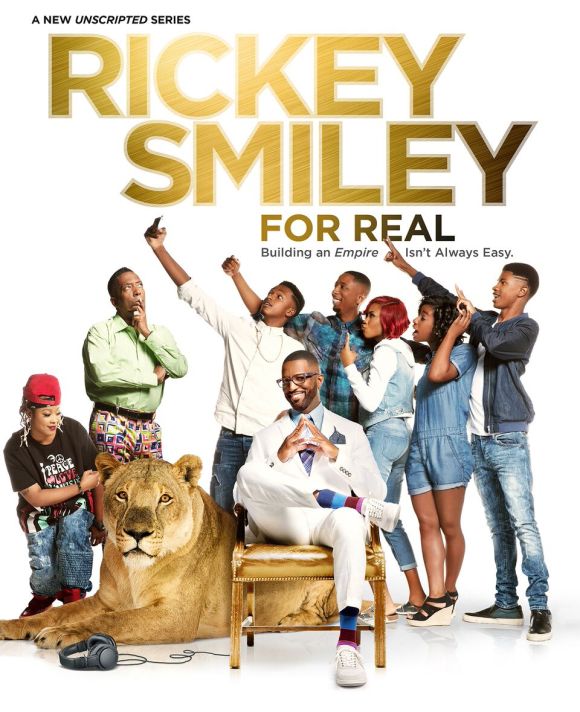 One July 20, 2016,  TV One announced the third season renewal of the heartwarming comedic docu-series Rickey Smiley For Real.  The third season will return with even stronger bonds and bigger laughs, as comic and radio personality Rickey Smiley continues to strive to achieve his quest for domination of the entertainment industry.  In the second season, which debuted in May, viewers have watched Smiley journey through a wild ride, ranging from his parental style being put to the test to fun family vacations to an epic DJ battle with a friendly rival morning radio show. Rickey Smiley For Real continues to post double digit gains, and is currently outperforming its first season across all total and key Black demos.

“The consistent growth of Rickey Smiley For Real demonstrates the strong connection our viewers have with Rickey’s lovable family and laughable team,” said D’Angela Proctor, Head of Original Programming and Production for TV One. “Over two seasons, new and devoted fans have watched as the cast takes great strides in their personal lives and we look forward to watching as the cast exhibits their commitment to the community as well.“
“Although I am happy about the renewal for Season 3 of my show; it’s very difficult for me to celebrate as I sit here and watch the funerals of Philander Castile and Alton Sterling,” remarked Smiley. “I yearn for our country to be solid and to embrace our differences and to understand our differing communities and history.  We have too many others in the world trying to destroy what our nation, on the pain and suffering of our own people, has built.  I assure you that police violence will be a topic addressed in Season 3 as I feel compelled to use my platform to make change in this country for the good of all our citizens.  I’m thankful my show is doing well, but our nation, especially black America, is grieving at this time.“
Infusing his brand of comedy into every situation, Rickey Smiley For Real, also introduces viewers to his four children – sons Brandon and Malik and daughters D’Essence and Aaryn – as well as his extended family of co-workers, colleagues and friends – his nephew Craig, live-in assistant Miss Pat, personal assistant Angie, business consultant Bruce Demps, childhood friend and family lawyer Nakita Blocton, radio co-hosts Da Brat, Gary With Da Tea, Headkrack, Rock T and Juicy, and radio show producers Beyonce and Hollywood.
As a much-loved comedian, television host of Dish Nation, and top-rated nationally syndicated radio personality of The Rickey Smiley Morning Show, Smiley rose to superstardom after igniting his 25-year career serving as opening act for industry titans such as Steve Harvey, George Wallace and Carl Strong. Throughout his career trajectory, Smiley has been one of the industry’s most towering forces in building an impressive empire that has landed him preeminent roles on radio, television, film and on-stage performances. For more information on Smiley’s personal and professional background, please visit: http://therealrickeysmiley.com/.
For more information about Rickey Smiley For Real and Rickey Smiley, visit http://www.tvone.tv.  Viewers can also join the conversation by connecting via social media on Twitter, Instagram, Facebook and Periscope (@tvonetv) using the hashtag #RickeySmileyForReal and catch clips and promos on TV One’s YouTube Channel.
Rickey Smiley For Real is produced by Bobbcat Films for TV One with Rickey Smiley and Roger M. Bobb as executive producers and Angi Bones as co-executive producer. For TV One, Lamar Chase is executive-in-charge of production, Robyn Greene Arrington is vice president of original programming and production, and D’Angela Proctor is head of original programming and production.