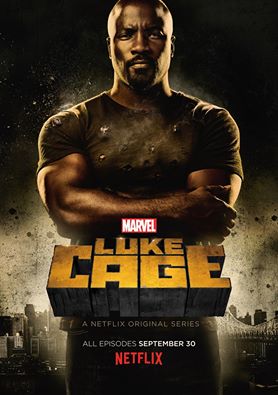 Netflix released the first part of the Marvel’s Luke Cage Street Level Hero socialvideo series here: https://youtu.be/oVmcur3INOE . These digital videos look to blend fiction with history by taking audiences behind the curtain on the themes that give the show it’s street-level authenticity and cultural relevance.

Part one explores the music that moves the series. Executive producer Cheo Hodari Coker, Mike Colter, Ali Shaheed Muhammad and Adrian Younge of A Tribe Called Quest, A$AP Ferg and Method Man lend their commentary on how each episode is shaped by its score and musical influence.

Marvel’s Luke Cage, which premieres globally on September 30, 2016 at 12:01 am PT is the third show in the Defenders series to launch on Netflix. The series follows the releases of Marvel’s Daredeviland Marvel’s Jessica Jones, leading up to the future release of Marvel’s Iron Fist, and ultimately, Marvel’s The Defenders.

In this groundbreaking new series, audiences will witness the evolution of Luke Cage (previously introduced in Marvel’s Jessica Jones) after he has relocated to Harlem and is in the process of picking up the pieces following his failed relationship with Jessica Jones. Like the preceding Marvel series on Netflix, Marvel’s Luke Cage is a gritty, action-packed drama, grounded in the real world with heroes who focus on saving their neighborhood and have their feet firmly planted on the ground.

After a sabotaged experiment leaves him with super strength and unbreakable skin, Luke Cage (Mike Colter) becomes a fugitive trying to rebuild his life in modern day Harlem, New York City. But he is soon pulled out of the shadows and must fight a battle for the heart of his city – forcing him to confront a past he had tried to bury.

On Wednesday, May 18, 2016, CEO and Founder of Flix Premiere, Martin Warner addressed and discussed the future of online cinema during his keynote at the 69th Festival de Cannes and the Marché du Film’s NEXT program, the festival’s future of cinema forum. Warner was interviewed by Chief International Correspondent for Variety Magazine, John Hopewell.

During the discussion, Warner outlined new models for film distribution and online movie consumption. Warner also discussed how the new disruptive model of an online Cineplex will give movie audiences broader access to a greater variety of world-class movies and share updates on what Flix Premiere has achieved within the last year to democratize cinema.

This was Flix Premiere’s second event at the festival, following its debut at the 68th Festival de Cannes in 2015, when the company initially launched its mission to revolutionize the film industry by offering brand new movies anytime, anywhere.

Judith Davis in Cannes for the Flix Premiere launch

According to Warner, “Each year tens of thousands of movies are made worldwide, but only 5%of these movies find their audience or recover investment. The other 95%, albeit most of great movies, get lost in an archaic distribution system, without their audience knowing about them, Each great movie deserves a chance to be seen. Using an innovative movie curation system and marketing model that gives each of these films the spotlight they deserve, we can connect these movies to their audience worldwide and – at the same time – give online movie watchers broader access to the types of movies they crave to see.

In 2015, at the highly anticipated Flix Premiere pre-launch party, the company also announced their Democratize Cinema campaign. This campaign enables filmmakers, directors, producers, movie critics, and all movie-goers to become involved in a mission that aims to provide one true single point of discovery for great new movies. This campaign is truly driven to help all underappreciated and overlooked films finally realize their full potential. As of May 1, 2016, more than 105,000 people have signed the online petition, expressing their hunger for a single point to access a broad range of high quality films with a hotbed of emerging talent. “Great films should not be dependent on who is in the movie, which studio produced it, or how much it cost produce, but instead on the power of story, characters, resonance, relevance and much more,” stated Warner.

Flix Premiere is the brainchild of serial entrepreneur and film producer Martin Warner. The world’s first cineplex uses technology innovation to break traditional barriers and connect audiences with the work of talented filmmakers. Flix Premiere initiated its global roll-out with a soft launch in the UK, providing film viewers in the UK a new destination to discover movies across genres including drama, comedies, documentaries and animation. The platform is next set to launch in the US and other locations as well.