Amber Riley Performs at the Pre-BET Experience Event on June 22, 2016 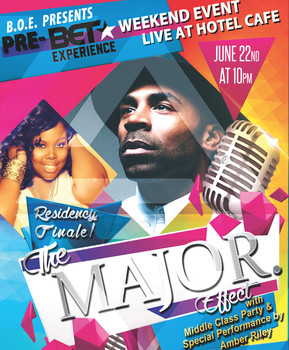 Amber Riley as fans know, has appeared in shows such as Glee. She is also known for winning season 17 of Dancing with the Stars. MAJOR is the fresh new face and voice of soul-pop music, but he’s no stranger to the music industry having written for Ariana Grande, Nathan Sykes and EPIC Records’ “Think Like A Man Too” original motion picture soundtrack. Currently, MAJOR’s debut single “Why I Love You” is currently trending at #34 on the Urban AC Chart. There is a meaning behind his birth name MAJOR. (spelled with all caps and a period at the end) but even more purpose behind his music. The multi-faceted singer delivers a soulful-pop sound to the new age; while giving a mix between Bruno Mars meets John Legend with a hint of Maxwell on steroids. MAJOR.’s distinct voice and cool presence gives birth to a sexy aura that he exudes from the inside out.

This event is held just before the ground breaking BET Experience in LA. To listen to music by MAJOR, specifically, “Keep On” & “Why I Love You”, visit his page on Sound Cloud. For information on Amber, follow her on social media, via Facebook, Twitter,and Instagram.
Tagged Amber Riley, BET Experience, concert, Music